I did my last long run on Saturday morning, and well, it was embarrassing.   Let me tell you why.

I ran 7.5 or 8 miles, not exactly sure cuz my Garmin died after about 3 miles (oops, you would think by now I would remember to charge it the night before!).  I ran out to the stinky meat packing plant (which is about 4 miles) and ran back.  It was a really great run despite running my first 4 miles straight into a big, strong wind.  When I hit my turn around point, I thought I would call my Grandma and visit with her for a little bit.  Never ever did I imagine I could carry on a conversation while running.  But Taryn proved me wrong when she took me out for my 4 and 5 mile runs back in July.  She told me “We will get you to 5 miles.  We will talk the whole time and it will go so fast!”  My response: “Ya, right! I can’t talk and run.  I would die!”  Like I said, she proved me wrong.  And I have gotten to where I can talk the entire time I’m running! So I talked to Grandma for a bit, then my mom called me and we had a 3 way convo for a couple miles.  Fastest 4 miles ever.  I wasn’t even thinking about running.

But why was it embarrassing?  I was relaying a rather embarrassing story to them.  2 weekends ago, we lost Cory’s grandmother.  She was nearly 86 years old and had put herself on hospice (I will dedicate a post to her in a couple weeks-she was a sweet and precious lady!)  Her service was beautiful and so was her burial.  However, something happened that made me want to just disappear during the prayer at the burial.  I was holding E, standing not to far from the sitting area located in front of the casket.  Cory was a pall bearer so he was standing in front of his grandmothers casket.  Cory’s cousin’s wife, Paige, was helping me with E, trying to keep him entertained so he would be quiet.  Something you must understand about my child:  He is always on the go, never still and never, never quiet.  He is as extrovert as they come.  Anyway, we bow our heads in prayer, and in the quietness of that prayer, I hear noises coming from E’s diaper.  And these weren’t quiet noises.  I open my eyes wide and Paige does too.  We look at each other, our eyes about to pop out of our heads and we have a conversation with our eyes.

Stephanie: Did that really just happen?

Stephanie: Was it loud? Do you think everyone heard it?

Paige: There is no way anyone could have missed it.  They would have had to be deaf.

Yes, we had that whole conversation without actually talking.  Oh and it gets better.  Still in the quietness of prayer, E grabs my face and pulls it toward him so that he may have my full attention and starts to yell out at the top of his lungs:

Oh my goooooossssshhh…….  Paige and I start to giggle, because we honestly don’t know what else to do.  And everyone under the tent, including Cory’s parents and aunts/uncles begin to chuckle too.  I just wanted to disappear…

Back to running on Saturday.  I’m running along the outer road, where there is barely any traffic and normally no people either.  My conversation continues:

Me to Mom and Grandma: “So he passes gas and then he grabs my face and tells me ‘I POOP, I POOP’ really, really loud.”

Mom and Grandma start laughing hysterically.  I look over to my right…

Me to Mom and Grandma: “ok the situation at the burial was embarrassing and the embarrassment continues. I just said “I poop. I poop” really loud while passing a group of men preparing a barbeque.  To them, it just looked like I was running, listening to music, and just hollered out “I poop.”  Could someone just shoot me?”

Mom and Grandma nearly fall out of thier chairs.

Now that I have added to my embarrassment, by forever documenting this story on the blog, I will leave you with a map of the Disney Wine and Dine route we will be running this weekend.

Taryn, I promise not to yell “I poop” while we are running our 13 miles this weekend…. 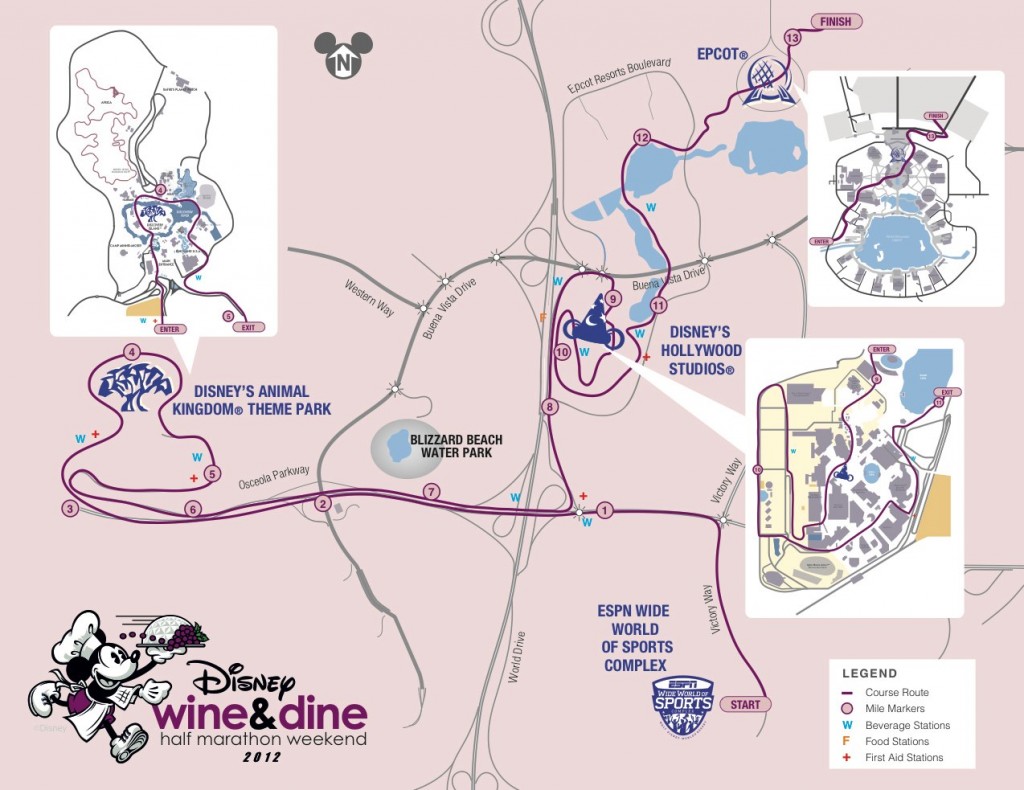