I know my blogging has been kind of scarce over the past month.  So sorry! The trip to Orlando was amazing and I will be posting my race recap next week.  And the other 2 weeks of November were spent with my family in St Louis and I was soaking up every second I had with them, which left me very little computer time!  And we have been so busy since I got back to Texas.  Just this past weekend, we had been invited to 4 Christmas parties, but we only could make it to three.  And it was only first two days of December!  I am a frazzled momma with to much going on and no time.  Between all the festivities, I also have to finish Christmas shopping and plan a birthday party for E.  He will be 2 in 4 weeks! Ahhh!!

So anyway, on to Monday Runday! 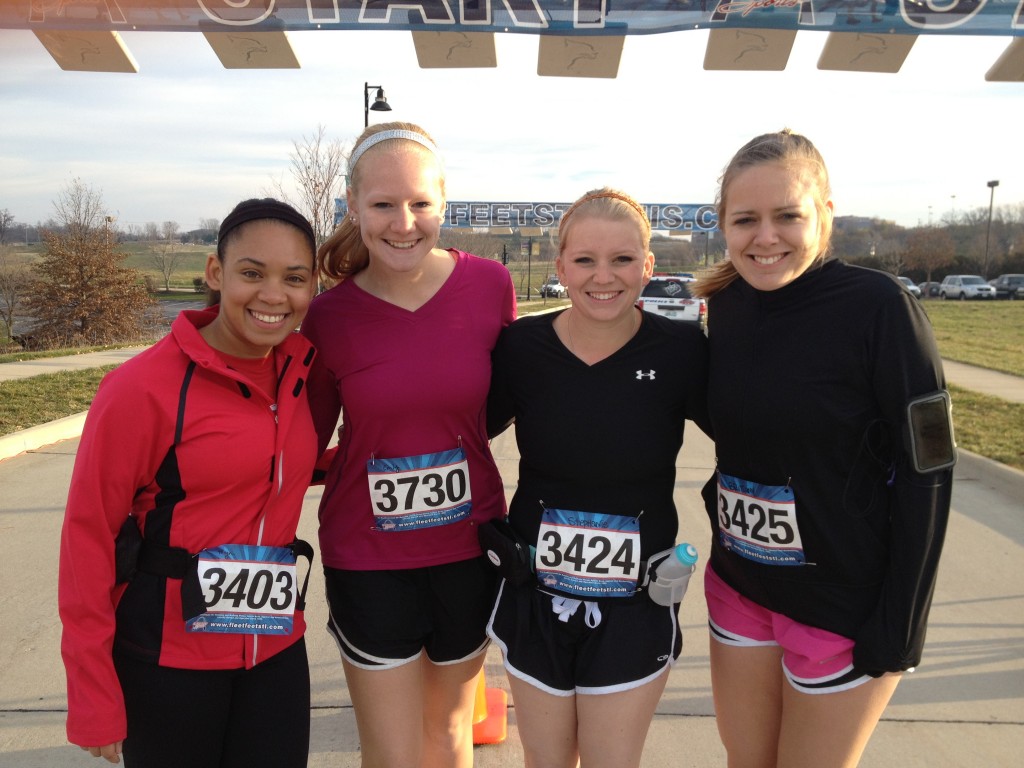 From left to right: My 1/2 marathon partner and awesome friend Taryn, my uber tall and ginger cousin Emily, short stuff=me, and Brittany, my brilliant soon to be architect cousin

Taryn and I had talked about doing a Turkey Trot, but after our half marathon, we decided to take a break and just plan to do another 5k the next time I visit St. Louis.  But then my cousin Brittany texted me and asked if I would want to do a turkey trot with her.  And of course, because I heart running and just couldn’t resist, I said yes!  So I texted Taryn, who also couldn’t resist and said yes.  I was visiting my aunt/uncle/cousins after going for a bike ride with my Uncle, and I was telling them about the turkey trot.  My 17 year old cousin Emily (who happens to be an amazing dancer!) decided, with less than 24 hours til the run, to join us!  So at 8 am on Thanksgiving, we all headed over to Chesterfield and participated in the Chesterfield Turkey Trot. 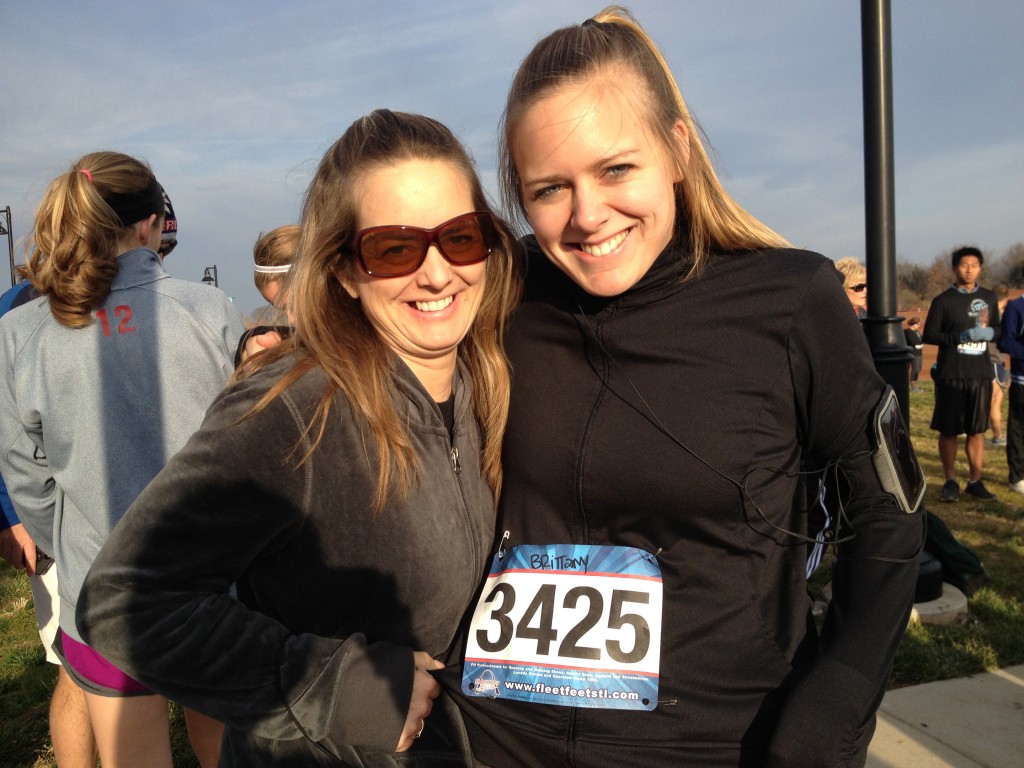 My awesome aunt/Brittany’s momma hung around to cheer us on and waited for us at the finish line! 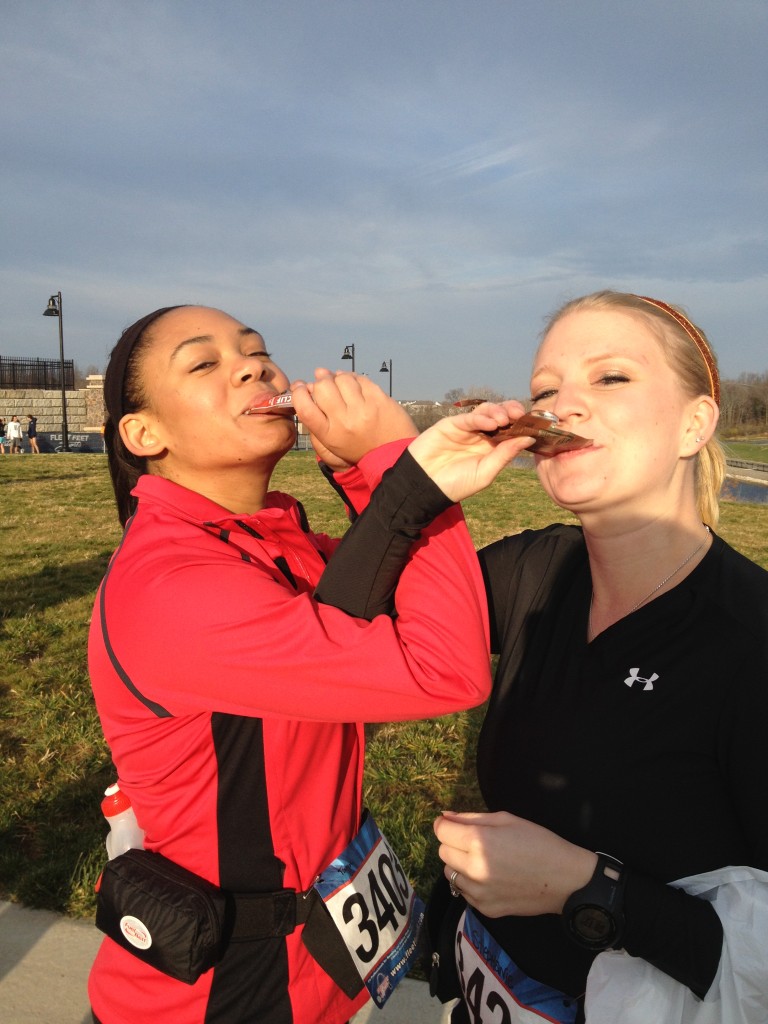 Taryn and I decided it best to have a ceremonial Gu energy moment. We got these at mile 8 of our half marathon. Most importantly, they had caffeine in them. And early morning runs require caffeine for these girls. 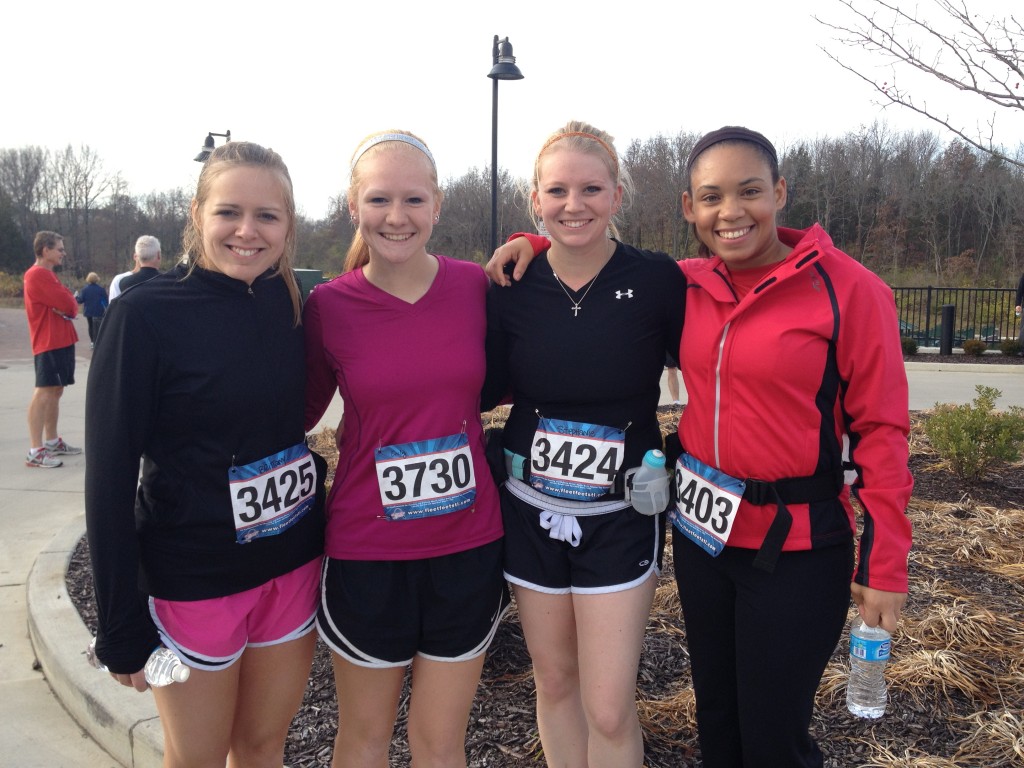 Brittany said she normally runs about a 10 minute mile, so we all decided to let her set the pace and we would try to stay with her, because all of us are decent enough runners to run at that pace for a 5k (even though its really hard for some of us!) I usually run at a 12 min pace.  The horn blasts and the four of us, along with the other 3,482 runners, took off! And so did Brittany! Peace out Brittany!  And Emily was just as fast as Brittany.  Peace out Emily!  Taryn and I are like…what?!?! That is NOT a 10 minute pace.  Brittany and Emily don’t run with garmins.  When we finally caught up with  them, I informed them that their pace is certainly not 10 minutes!  Taryn and I were doing 10 mins and these girls were WAY ahead of us.  They had to have been doing at least an 8 or 8:30 pace.  My goodness!

Emily (who you must understand is prone to injuries-the girl has broken more bones than I can count) had some troubles with a charlie horse, and Taryn, being the momma runner that she is (love her!), ran a bit slower with Emily who was in pain but declared “I’m a dancer! If I can do point with bleeding feet, I can do a 5k with a charlie horse!”  I’m so proud of her for finishing! Even with her new friend Charlie the horse, they finished it in 36 minutes! Go girls!

Brittany slowed down a bit because there was no way I could keep up with almighty amazon legs.  I’m all puffing and she’s like “10 minute mile…no big deal.”  This girl is a well trained runner.  She simply amazes me how she just runs so fast with ease.  I so want to be like that!

Did you take part in a Turkey Trot?  I realize Thanksgiving is over, but I’d still love to hear about it!!