If you are looking for a tutorial on how to spend $600 on running in 2 days, then you have come to the right place.  Apparently, I have that down to an art.

You may recall that I did my first 5k, The Color Run, on June 30th, in Kansas City, with a really sweet friend and my awesome cousin.
What I didn’t tell you in the Color Run Recap is how I killed my phone.
Rewind to 10 days before the Color Run.  I have had an iphone for many years, but last month it started to act funky and I took it in to AT&T.  I was able to upgrade at this time so I checked out the HTC One X and decided to give it a try.  I am an Apple girl (LOVE MY IPAD), and was totally fearful of Android, but I am loving it so far.  They gave me $160 credit for turning my iphone in so this new HTC phone that normally cost $550 without a contract ($200 with a contract-which I have) cost me $40.  SWEETNESS!
Fast forward to June 30.  There we are at the Color Run.  We ran 3.1 miles with my phone safely tucked in Taryn’s fuelbelt.  Why didn’t I leave it in the hotel?  It takes REALLY good pictures!  And I wanted to take some post-race pics.  I got it out after the run and started snapping away. Then it came time for the post run paint explosion celebration.  See below. 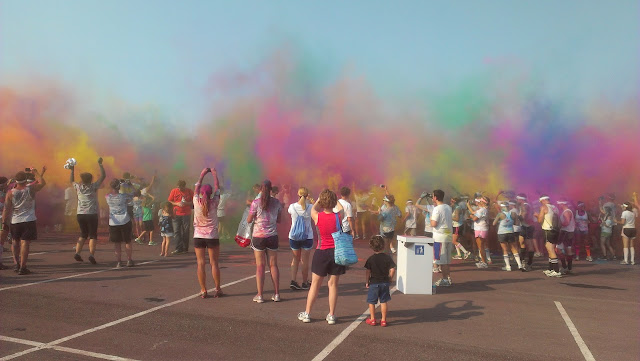 I thought to myself, “this paint explosion only lasts like 1 minute before the color clears from the air.  I’ll just tuck my phone into my sports bra to keep it safe.”  And that’s just what I did.  1 minute later after being in that crazy fun colorful mess, I got the phone out to take some pics of our glorious color covered bodies, and my phone started going crazy.  I could not figure out why the heck it wouldn’t work.  Later we got back to the hotel, and found that there was moisture under the screen.
I broke my phone with sweat.
Seriously embarrassing.  We went to the AT&T store in KC and thankfully I have insurance on my phone.  I never have had insurance before in all my years of having a cell phone, but something about a toddler and his new fascination with toilets inspired me to get insurance.  $200 later, I have a new phone..again.  *sigh*
Now let me take you to huge expense #2.   On July 4th, Cali and I went out to do some early morning trail running at Castlewood State Park, a BEAUTIFUL park near my parents house.  Cory and I used to mountain bike here several times a week when we lived in Missouri.  It has some really amazing trails.
Cali is an amazing running partner.  I barely even have to hold on to her leash; she stays right with me.  We started last year with the couch to 5k and I have seen her progress into an awesome athletic dog.  The silly dog just has to see me start putting on my compression leggings and she will go crazy.  That dog was designed to run.  We usually run 2-3 times a week in Texas and for the past few months we have done at least 3-3.75 miles per run.
On this trail run, Cali and I ran a total of 4 miles, only 0.25 miles longer than our normal run.  Everything about this run was similar to our runs at home.  It was in the 80s (same temperature when we run in the evenings in Texas), close to the same mileage, and we took a few water breaks.  (I have a fuel belt that I carry water in and I have a bottle designated for Cali).  At the end of our run, I noticed Cali started to pant different and that her saliva had become very frothy.   She had a stressed look on her face and I could tell something was off.  I was afraid she had gotten to warm so I put her in the river to cool her off. 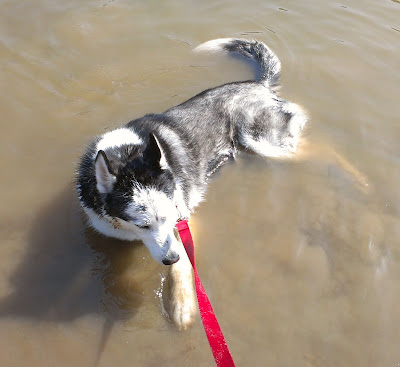 We sat in the river for about 10 minutes cooling off.  One thing you should know about Cali: I am pretty sure she thinks she is a lab.  This dog LOVES water and we can hardly keep her out of my parents pond when we visit.
After 10 minutes, I decided it was time to go and Cali would not budge from the river.  Even with her love of water, I began to get concerned.  Cali is a very obedient, sweet dog.  The fact that she would NOT get up, even with a tug of the leash, started to worry me.  I started to panic on the inside.  I knew something was not right.  A gentleman that was fishing down the river came over to help me and eventually we got her to get up and she wobbled to the car.  Luckily, we were very close to where I had parked.
I took her home, and my Mom and I started looking for an emergency vet that was open on a holiday.  We found one and off I went with my dad’s moral support while mom stayed home to watch E.  When we got Cali there, they immediately took her back to the ICU, examined her and started IV fluids.  I was not allowed back in the ICU, so my heart just ached as I wondered if I had just accidently killed my dog 🙁
After the doctor examined her/started fluids and he had talked to me about what happen, they brought her out for me to see her.  When I saw her, I apologized to her over and over and hugged my sweet puppydog.  I didn’t get to see her long as they had to take her back to continue her fluids.  Rather than go home, I decided to stick around and wait for the bloodwork.
Here is a little lesson for you: heat exhaustion and heat stroke are extremely life threatening.  Heat stroke can lead to organ damage/organ failure and can kill quickly.  Knowing all this, my heart ached and my stomach hurt. And I cried, cried, cried, while I awaited for the results, knowing that the bloodwork would show if any organ failure was happening.  It felt like that blood work took an eternity to get.
The doctor finally came out and gave me the results.  Without going all nursey on ya, 😉 her labwork showed expected abnormals for dehydration, and no abnormals that would indicate organ failure.  Her kidneys were on the elevated side of normal, but as long as she continued to improve, they wouldn’t do bloodwork again.  June went into kidney failure a few weeks ago, so sadly I know what that looks like. 🙁  There were no signs of any type of organ failure.  Praise God!! Cali was diagnosed with heat exhaustion/mild heat stroke and had to stay the night for monitoring and fluids. The doctor told me that if I hadn’t put her in the river, then this story would have had a different ending.  #sinkingfeelinginmystomach
So why did this happen?  Why did Cali overheat when all the conditions were the same as our normal runs?  The answer: humidity.  We do not have humidity in West Texas.  Not much anyway.  And here in St Louis it is really stinkin humid.  We have run in this type of weather before here, but apparently with the heat wave that has recently come through here, the humidity was worse than normal. It was in the 80s when we ran, so you wouldn’t think the humidity would be that huge of a factor.  But it was, and it caused her to overheat :/
I called my vet and visited with her about what happen, what the doc here was saying and discussed the lab results.  (We seriously have the best vet in the world.)  She reassured me that given the lab results, Cali would be fine and it didn’t sound like there was any lasting damage.  She also reassured me that when it cools off, Cali can go out running again.
I had absolutely no idea that the humidity could have such a drastic effect, and now I feel like a bad pet owner for not knowing. 🙁  So if you run with your dog, please be careful about the humidity! Let my experience keep you from having to experience something like this!  It was heart wrenching!
Cali has forgiven me, thank goodness. And with a $400 vet bill later, my dog is safe and healthy.  And while that kind of hurts my checkbook, my dog is totally worth it.  And I can’t stop thanking God for that river!
So that, my friends, is how you spend $600 on running in a matter of 2 running days.   I am praying that my next run is significantly cheaper, like zero would be great.  Geez!
I leave you with a video of Cali, telling me how much better she is feeling 😉
Let’s pray that next week’s Monday Runday is way less exciting.

{Made 2 Crave} Finding my Beautiful
Happy Blogiversary to me!!!