I’m becoming a little fearful of running because out of my last 5 runs, 3 runs have either harmed something, someone, or myself.  I ran last Saturday with Taryn (my half marathoner buddy) and this was our conversation via text (she is in green, I am in gray). 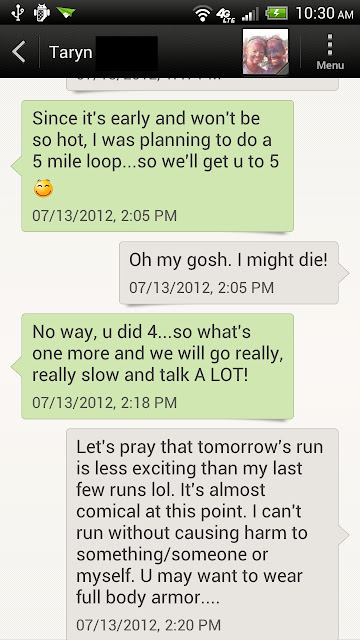 So bad things happen in 3’s, right?  What is up with that? I should have expected it, I guess.  Let’s see: 1) Color Run phone death, and 2) my dog’s near death experience…how I could I expect anything less exciting to happen on my next run?

July 11th.  I go back out to Castlewood to do another trail run.  Oh how I wish we had places like this in West Texas!  In Missouri, we have something called trees and rivers.  Oh how I miss that!  But granted, we do have amazing sunsets in Texas!

Let me tell you why trail running is so much fun.  When you run on a trail, there are twigs and sand and rocks and boulders and fallen trees and hills (small ones!) and narrow paths…you get the idea.  When I run, I feel like Katniss out on the hunt.  It is sooooo much fun!  It was starting to get dark, especially under the forest of trees.  And about half a million deer began to make their presence known on the trail.  At 3.75 miles into my run, there was a deer practically standing in my path and he didn’t act as though he was going to move, even though I was approaching.  I started to kind of stomp my feet as I ran in hopes it would make him take off.  And it did.  And I watched him bound off.  Just a warning: when trail running, PAY ATTENTION to the trail!  As I watched him bound off, my right foot caught a stump and I went flying at least 3 football fields down the path.  I had time to think about whether or not I was going to be impaled on something when I landed.  I landed with a loud thump. OOF! Ohhhhhh owwwwww.  I stood up, looked back to see what I had tripped over, turned to look at the path I had yet to run, and despite the aching, throbbing, burning sensations in my knees and hands, I started running again.  All I could think about is having mapmyrun post my run onto facebook (as it automatically does after my run) and show that I had an awful pace.  Ya, I am prideful like that.  So I run that last quarter of a mile, inspected the wounds and laughed at myself- running is becoming both an accidental expense and a threat to my (and others) existence.

As you saw in the txt, Taryn decided to take us on a 5 mile loop in Brentwood, Missouri and we did that last Saturday.  I was convinced I was going to die as I have only done 4 miles twice now, but as good friends do, they push you to do things you never thought you could!  I am used to running solo and going into my own little world with my headphones on, so this whole running with friends is new to me and the idea of “talking” while running seemed impossible.  Until we started running.  And we talked the entire time, and it was possible, and glorious!  We visited the entire 1 hr 3 minutes! Ok, well maybe Taryn did more of the talking the last 10 minutes, because well, mile 4 was just plain HARD because  1) I am not used to talking while running (although it was awesome!) and 2) We don’t have hills in West Texas…

We made it back to Taryn’s house and she began celebrating our 5 miles!

Taryn: “Aren’t you excited!? You did 5 miles!! SO AWESOME!”
Me: “I’ll be excited after I collapse on your floor and the feeling of death wears off!”

Ok, so maybe it wasn’t that bad. I felt really good during this run.  The last mile was a bit harder, but it was hot and hilly (ya, that’s my excuse!!) We did celebrate by collapsing on the floor (well, at least I did), some cool water and a nice long visit!

And no one was harmed in the making of this run.  That’s a bonus 😉

Want to join me on Monday Runday?  Post a link to your blog about your run and I will come visit you and follow you!  Or just share about your week in running in the comments!

Happy Blogiversary to me!!!
{Made 2 Crave} I’ll start again on Monday