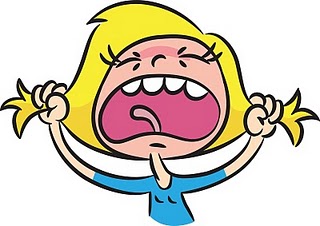 I def have a case of the Mondays.

First of all, I didn’t get much sleep.  I went to bed to late (about 130 am) partially because I was paying bills/working on finances and partially because my 3 hour Sunday afternoon nap made me less tired last night.  And then at 5 am, I woke up with some crazy gi stomach issues (like you wanted to know that…)  Back and forth to the bathroom from 5am-730 am.  All I will say is that it was not good.  Whatever GI funk I had this morning has left my tummy a little sour.  Not sure if its something I ate or a virus, but it was not pleasant.

Secondly, Eli is teething.  I can feel 3 sharp little teeth poking thru his gums.  Let’s just say he is not in the best of moods either.

Thirdly, my dogs were playing and now we have to take a trip to the vet this afternoon. 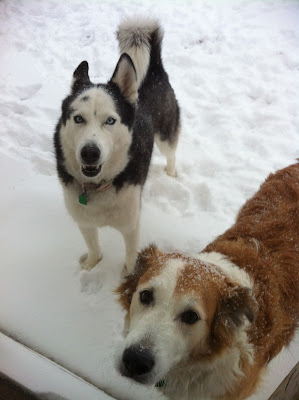 You’ve met Cali, the husky.  Meet June, the red-headed english shepard mix.  She is one of the most sweet, loving, laid back dogs you will ever, ever meet.  She is a really great dog.  Cali and June were out playing like crazies in the backyard.  Running and wrestling.  Then June suddenly collapsed and her gums went white.  After about 1 minute, she came to and I helped her up and she went about as if nothing was wrong.  uggggh. Stress me out.  She is either 12 or 13 years old (she was a stray that Dr Hubs adopted back in 2001) so she is old. But other than this episode, she is generally healthy.  She doesn’t act like she is that old!

Anyway, we are off to the vet at 3pm for some tests to see what the heck is going on.

As far as the spring chick challenge….

Last week I told you about how we were making necessary adjustments to our workout schedule until the Dr’s disseration is done.

Last week didn’t exactly go as planned.  I was having massive headaches last week as a result of chiropractic care and the healing process called retracing.  So seeing as I felt awful most of last week, I didn’t hardly workout.  I stayed active working around the house and cleaning etc, but once again, I was unable to workout hardcore like I was doing 1 month ago.  The headache is still there and doesn’t appear to want to leave anytime soon, but it is not as severe as last week.

A couple weeks ago, I was ok with this lack of exercise, knowing that I will work it back into my schedule soon.  Or rather, prioritize it differently.  But now I feel flaky.  I feel like a disappointment.  It’s been a month since I have really been on my regular workout schedule.  I feel like I’m allowing “life to get in the way” to prevent me from working out.  And I don’t like using that as an excuse.

I weighed this morning and I am at 125.8.  I’ve been fluctuating between 124-126 lbs.  I’m good with that.  As long as I stay under 130, I’m happy.  I still have alot of work to do on this post-preggo tummy, and I def want to work on getting tone.  It wouldn’t hurt to lose another 5-8 lbs, but I am not consumed by losing that weight as I would have been in the past.  I guess that is a positive thing, huh?

However, I do feel better when I work out.  I feel more energized and like I can tackle the day’s challenges.  I’m really hoping to do some turbofire this afternoon after the vet appointment, if anything, just to vent some stress out!  I’m also going to create my workout plan for the week.  When I have a plan written out, I find it easier to stick with it (most times, anyway!)

Sorry I’m not a beaming ray of sunshine today.  But on this blog, I’m real. And we all have days that are not sunshiney, right?

I do hope that you are having a much better Monday than I am!