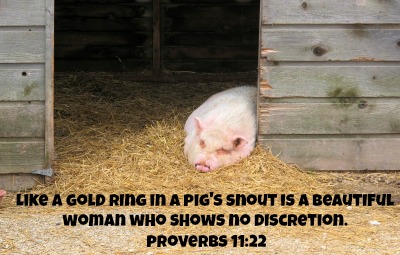 I’ve read that before, but never understood what the heck it meant.

Translation: A woman who lacks discretion makes a fool of herself.

Discretion:  It is the power or right to decide to act according to one’s own judgement.

Only one verse in the Book actually calls out the INDISCREET woman, but there is much in the Book about the DISCREET woman. Laurie points out that if you look in the old testament for the discreet woman, you will find her described as discerning, prudent, understanding, insightful, wise and knowledgeable.  In the new testament, she is described as discreet, sensible, sober, self-controlled and wise.

Let’s take a look at both of these ladies.

1. She talks to much and says whatever comes into her head.
God designed woman to be relational and we accomplish that by talking, and talking, and talking.  That’s okay, as long as we know when to shush it.  The indiscreet woman doesn’t know when to stop, and she doesn’t think before she speaks.    She says things she shouldn’t say and her words are not uplifting.  She needs to take a chill pill to cure her motor mouth!

2.  She yawns at personal and spiritual growth.
The indiscreet woman thinks it is to hard to read the bible and pursue the Lord.  It’s to hard to put effort into bettering herself.  Spiritual growth bores her.  It is not a priority for her.  She lives for herself, not Him.  As Laurie puts it, she is after “empty pursuits.”

3.  She makes poor decisions based on bad judgement.
She has bad judgement and consistently makes bad decisions.  She makes mistakes over and over again.  She is naive and doesn’t consider the consequences.  Sadly, she is unaware of her foolishness.

4. She’s moody and enjoys drama.
The indiscreet woman likes being the center of attention.  She will even start the chaos!  She doesn’t care much for others feelings and as a result, she hurts those around her.  Laurie refers to her as “the original drama queen.”

5.  She flirts with danger and invites it.
She gets herself into situations that are dangerous.  She believes anything, and that often leads her to disaster.

The indiscreet woman is a mess.  She sounds alot like the irritating woman, doesn’t she?

Can you see why discretion is so necessary?  Without it, you’re actually setting yourself up for the perfect storm to strike and destroy you. -Laurie Cole

Biblical Beauty Do- The Discreet Woman
1.  She holds her tongue and speaks with wisdom.

Wisdom is found on the lips of the discerning. Proverbs 10:13

A man who lacks judgement tears down his neighbor.  But a man of understanding, he holds his tongue. Proverbs 11:12

This is a woman who controls her tongue.  She thinks before she speaks and she knows when to speak, and when to listen.  She is wise with her words.

The mocker seeks wisdom and finds none.  But knowledge comes easily to the discerning. Proverbs 14:6

The discreet woman seeks to learn more about her Savior.  She longs to better herself for the glory of Him.  She spends time in the Word, pursuing Him.  She reads Christian books and participates in bible studies.  She has fellowship with other Christian women.  She seeks opportunities for growth and puts into practice what she learns.

3.  She makes wise decisions based on truth.

Every prudent man acts out of knowledge.  Proverbs 13:16

A simple man believes anything, but a prudent man gives thought to their steps.  Proverbs 14:15

Because the discreet woman is always seeking knowledge and to better herself for the glory of God, she is able to make wise decisions.  People seek her out for guidance because they respect her. She puts thought into her actions, and she doesn’t just make a decision based on feelings.  She goes to the Lord in prayer for guidance because she knows that He knows what is best for her, and she asks him to reveal that to her.   The smartest thing you can do is rely on Him!

4.  She is even-tempered and not easily angered.
She is spirit controlled.  She is flexible, caring and kind.  Again, she thinks about the consequences of her actions, and she acts wisely, even in situations that could easily anger someone.

5.  She recognizes danger and avoids it.
The discreet woman prevents herself from getting into dangerous relationships or situations.  She has good judgement in situations because she relies on Him and He helps her avoid the danger.  She teaches her children to avoid the path of destruction.

We have now looked at all three biblical beauty don’ts: The Immoral Woman, The Irritating Woman and now the Indiscreet Woman.

Next week, we will look at our first biblical beauty DO: The Captivating Woman.

To study this topic further (which you really should! This bible study is amazing!), check out Laurie Cole’s bible study Beauty by the Book.

Do you consider yourself a woman of discretion?

Listable Life: 5 things I do Everyday
Body Clutter Wrap Up