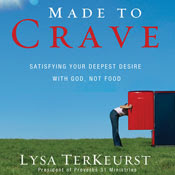 God made us capable of craving so we’d have an unquenchable desire for more of Him, and Him alone.  Nothing changes until we make the choice to redirect our misguided cravings to the only One capable of satisfying them.


When I was pregnant, I didn’t crave anything very strange.  But I did crave cereal. I had about 10 different boxes of cereal at any given time during my pregnancy.  Fruit loops.  Cinnamon toast Crunch. Special K.  Kix.  Fruity Pebbles.  You name it, and at some point it was in my pantry among 10 other cereal boxes just waiting to be devoured at any moment.  Most often those moments happened around midnight, which incidently was when I would crave tacos and pancakes too.  Ok, so maybe that is a little strange.  When those cravings hit, it was like I would do anything to get my hands on it.  We thought it best for my sanity to always have an ample supply of cereal in the house!

Cravings come in all kinds of packages.  Perhaps its that Vera Bradley bag (I’m sooo guilty.), or that Coach bag (not mentioning any names…MOM!)  that you just might die without.  Perhaps its a piece of chocolate or food in general (guilty).   It’s not bad to crave these things until you start to crave them more then the One who made us capable of craving.

Today’s devotional talked about the rich young man who comes to Jesus and tells him that despite following all the religious rules, he feels like there is still something missing.  Jesus tells him “If you want to be whole, go, sell your possessions and give to the poor, and you will have treasure in heaven.  Then come, follow me.” (Matthew 19:20-21)  The rich man goes away saddened.  Jesus basically said to the young man:


I want you to give up the one thing that you crave more than Me.

The rich man in the passage was not willing to make that sacrifice.

If your craving is an unhealthy craving or  has had a negative effect on your life, are you willing to give up that craving in order to draw closer to Him?

Better question: Are you willing to have an unquenchable desire for Him?

5 Things about myself that drive me nuts!
The Anti-Mommy Brain Study Group: Green Tea