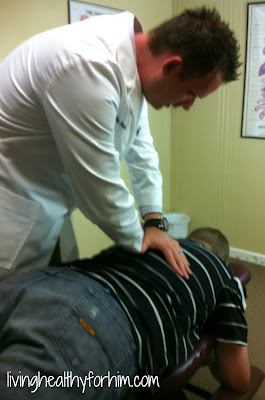 I’ve decided that Dr Hubby just takes to long to type..ya, waaaay to long to type.  That’s it.
So I will now refer to him as the Dr.
(totally stealing that from Dr Who!)
2 weeks ago, the Dr. went for his first chiropractor visit.
Yes, the entire family is now going! (and its changing our lives!) 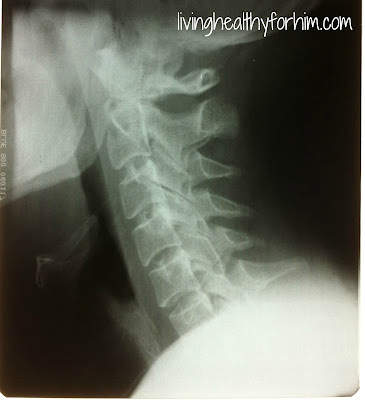 The Dr.’s neck actually surprised us. We expected him to have a neck just as bad or worse then mine. But as you can see, he actually has a C curve to his neck.  Shocked and surprised!  And his C7 vertebrae has what has been causing his fingers to tingle and fall asleep.  Adjusted and no more tingling! 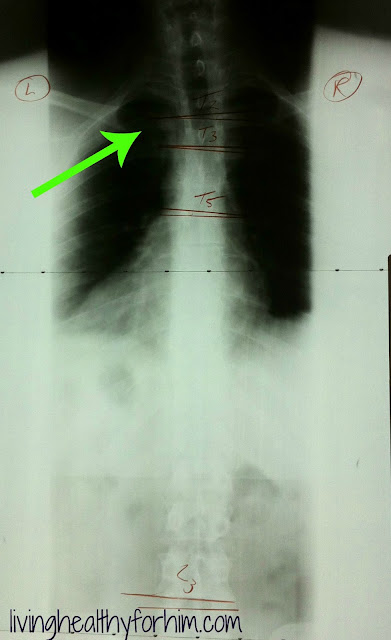 His true problem is in his upper spine.  As you can see where the arrow points, his spine is a little more than wonky. It’s veering towards the left quite sharply.  Dr P started questioning Cory about previous injuries he’s had and it turns out this is a football injury from his high school days.  The injury itself is called a “stinger.”
A stinger is:
How does a stinger happen?
A stinger is caused by a stretching of the brachial plexus nerves. These are peripheral nerves that exit the spinal cord and run across the shoulders, under the collarbone, and into the arms. The brachial plexus nerves are responsible for giving the arms their strength and sensation. As a result of a forcible sideways blow to the head or a blow to the shoulder itself, these nerves may become compressed, stretched, and irritated.
What are the symptoms of a stinger?
A side collision of this type causes immediate and intense pain, as well as a tingling or burning sensation in the neck that runs down the arm to the fingers. Weakness in the affected arm or hand is also common. The weakness, numbness, or tingling sensations may last as briefly as a few minutes or as long as a few weeks.

He’s been walking around with back and neck pain for 20 years because of this injury.

Without having seen Mr Squinty eyes in person, you wouldn’t be able to tell from this picture, but his shoulders have moved as a result of being adjusted.  The injury had caused his shoulders to pull forward and cause his upper back to be super tight.  But after his first adjusment, his shoulders moved back to where they are suppose to be!  Yay for the Dr!!
Tune in next Friday for another episode of the Spinal Series where I will share my most recent x-rays!

{Made to Crave} A Battle of the Heart
Ready for Summer Challenge: week 6